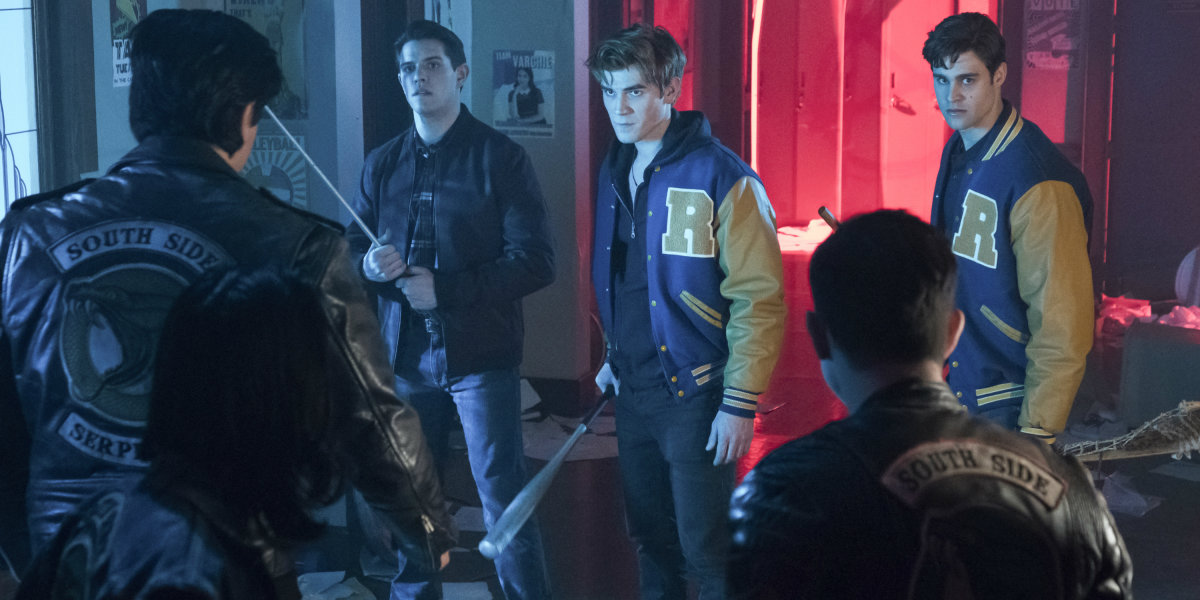 
Riverdale left no story stone unturned in the penultimate episode of season 2, ‘The Killing of a Sacred Deer’, finally revealing The Black Hood as Hal Cooper and teasing the death of Jughead Jones. Riverdale season 2 hasn’t been the most consistent of stories but the series truly went all out in the lead up to the finale.

Much still has to be revealed in the Riverdale season 2 finale. Although things don’t look good for the citizens of Riverdale, especially Jughead, the story is far from over. The main culprit behind the Black Hood attacks has been unmasked and apprehended. However, a copycat lurks in the shadows as does the potential death. The latter, if committed to, would change the dynamic of Riverdale forever.

Jughead Jones is dead, or at least that’s the way things appear at the moment. At the end of the ludicrously action-packed episode, Jughead made a deadly deal with Hiram Lodge. Jughead offered his life in exchange for the lives of all the Southside Serpents.

Jughead went to new leader of the gang, The Ghoulies, Penny Peabody. Jughead sacrificed his body to prevent the Ghoulies from attacking the Southside Serpents, including Jughead’s father, FP. ‘The Killing of a Sacred Deer’ closed with FP finding Jughead’s lifeless body, beaten to a bloody pulp and missing a huge chunk of his arm where his Serpent tattoo was once placed. It’s true, Jughead could just be unconsciousness. However before Jughead was attacked, Penny Peabody told Jughead he would die. She’s not one to leave business unfinished.

Elsewhere in the episode, Riverdale unmasked The Black Hood (the real Black Hood this time). As Betty Cooper (and many Riverdale viewers expected) Hal Cooper was the man inside the hood who cut bloody swath through the town. Riverdale revealed that Hal was much more disturbed than many knew and that the darkness had been instilled him from a very young age. Hal comes a family of killers. Hal revealed his backstory to his daughter Betty and wife Alice, before attempting to kill them both. However, the Cooper women worked together to take down Hal and he was walked out of their home in handcuffs.

Complicating matters, as Betty was getting the lowdown on her creepy father, another Black Hood was attacking Archie and his father next-door. This Black Hood escaped but not after Hal revealed that he wasn’t behind all the Black Hood attacks. There’s at least one other Hood out there. He attacked the Andrews’ home and shot up the town hall meeting with the mayoral debate.

This second Black Hood could be literally anyone, including characters that haven’t even been introduced yet. The culprit could be someone hired by Hiram Lodge, or even something as crazy as Hal Cooper’s yet-to-revealed secret twin. Twins run in the Cooper family’s history and they’re a recurring motif in Riverdale. Although it might be a little to similar to the recent Joker twist on Gotham.

The real mystery though is what is going to happen to Jughead. Things definitely don’t look good for “Riverdale’s own Holden Caulfield” and that impression is only reinforced by the trailer for the season 2 finale. The trailer opens with Betty, Archie and Veronica standing in front of a gravestone as Betty holds Jughead’s famous beanie. That’s an anvil-sized hint that the grave they’re standing in front of is Jughead’s own.

Yet there is another possibility, ‘The Killing of a Sacred Deer’ confirmed the death of another Serpent. Following through on the cliffhanger of the previous episode, Fangs Fogarty was killed. Fangs died not because of Reggie Mantle or Archie Andrews, but a grief-stricken Mrs. Klump who believed Fangs killed her daughter. The core Riverdale four (sans Jughead) could be standing in front of Fangs’ grave. Jughead isn’t present because he’s nursing his very serious wounds. This certainly wouldn’t be the first time that a trailer has intentionally led viewers into a misleading direction.

Granted it would be the most daring choice possible to kill off Jughead. In season 2, the fan favorite character has sort of floundered, going back and forth (almost incessantly) between his old life as a member of Archie’s gang and his new family of the Southside Serpent. In the end, Jughead made his choice as a Serpent. Season 2, in many ways, has been Jughead’s story. It would be a rather potent and tragic end for that story to close with Jughead’s sacrifice. The death of Jughead would change Riverdale forever but that could be an exciting set-up for season 3.

However, Jughead has become very, very popular. Jughead is a pillar of the show’s identity, maybe even more than Archie Andrews. This isn’t even to mention that he’s a member of the core quartet of Riverdale characters, in the shows and in the comics. Riverdale might be (very) loosely based on showrunner Roberto Aguirre-Sacasa’s Archie comic, Afterlife with Archie, which kills off Jughead almost immediately.  Still, a Riverdale without Jughead is too insane to imagine, even for the bold nightime soap.

Riverdale season 2 will conclude with “Chapter Thirty-Five: Brave New World” on May 16 at 8pm on The CW.