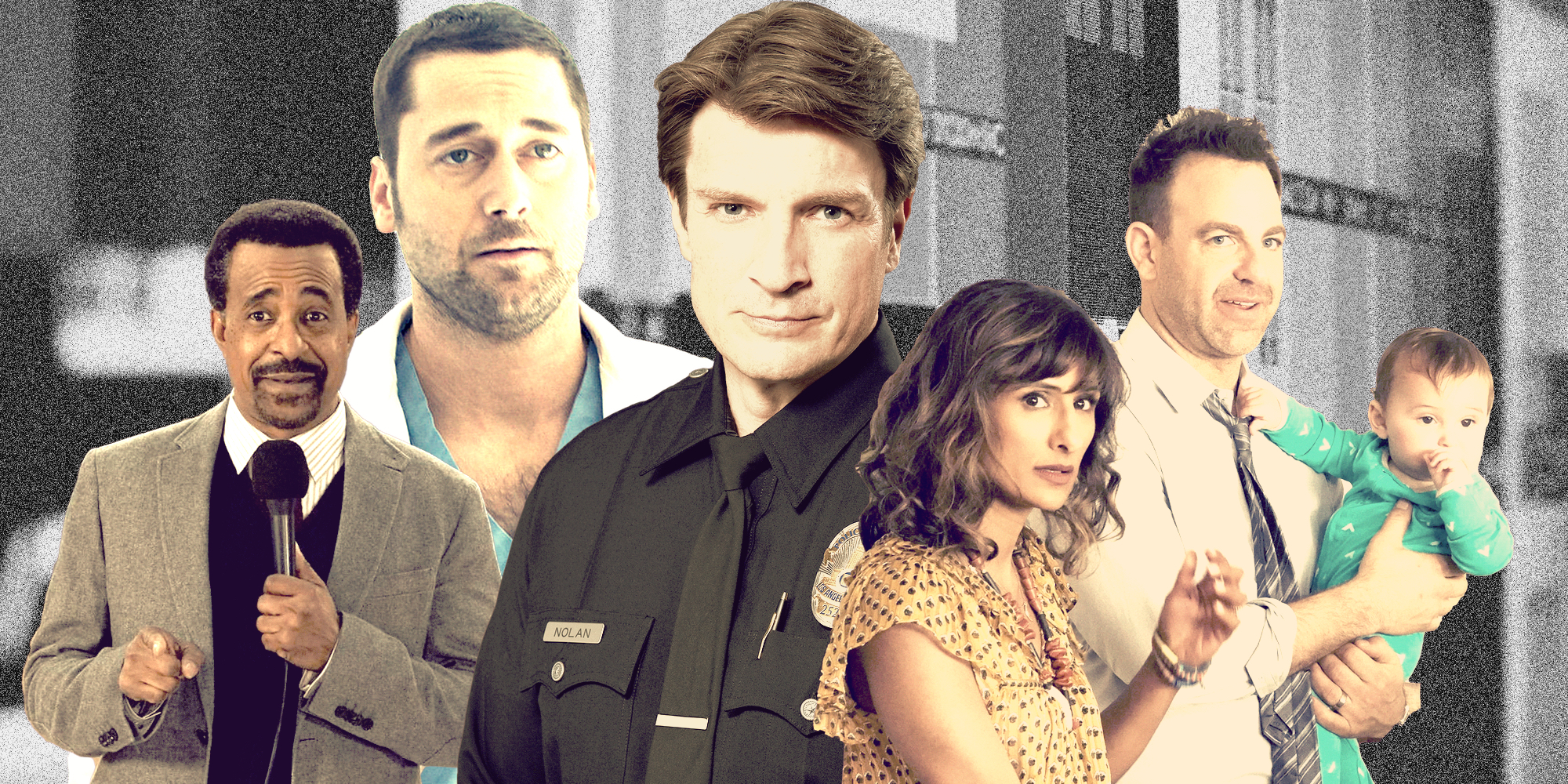 
With summer fast approaching that means the 2017-2018 television season is nearing an end. And what better time to start looking at all the new TV shows slated to premiere in the fall than right now? As the networks prepare for their upfront presentations next week, many have begun officially picking up new shows by announcing series orders. There are still plenty of pilots waiting for word on whether or not they’ll be moving forward or not, but so far ABC, CBS, FOX, and NBC have a handful of new shows ready to add to their fall 2018-2019 lineups.

The one outlier so far is The CW. The home of the Arrowverse has yet to announce any new shows officially, though it does have nine pilots in consideration. Some, like Wayward Sisters and reboots of Charmed and Roswell seem like shoo-ins for series orders. Meanwhile, the network is contemplating a number of other pilots, so it will be interesting to see what direction The CW may be headed, as its successful superhero universe continues to age.

There are plenty of new and familiar faces set for the 2018-2019 fall TV season, with Nathan Fillion making his first post-Castle return in The Rookie, while CBS is jumping on the revival bandwagon with Murphy Brown, which will reunite the original cast for the first time since the series ended in 1998. Check out all the new TV shows headed to the broadcast networks (so far) in the upcoming fall season.

“They say friendship isn’t one big thing, it’s a million little things; and that’s true for a group of friends from Boston who bonded under unexpected circumstances. Some have achieved success, others are struggling in their careers and relationships, but all of them feel stuck in life. After one of them dies unexpectedly, it’s just the wake-up call the others need to finally start living. Along the way they discover that friends may be the one thing to save them from themselves.”

“Starting over isn’t easy, especially for small-town guy John Nolan who, after a life-altering incident, is pursuing his dream of being an LAPD officer. As the force’s oldest rookie, he’s met with skepticism from some higher-ups who see him as just a walking midlife crisis. If he can’t keep up with the young cops and the criminals, he’ll be risking lives including his own. But if he can use his life experience, determination and sense of humor to give him an edge, he may just become a success in this new chapter of his life.”

“Ella (Bilson), the former star of a hit cop series, is fresh out of-rehab following a bender of epic proportion. Desperate to restart her career, she talks her way into shadowing rough-and-tumble private investigator Eddie (Cibrian) as research for a potential comeback role. Though lone wolf Eddie resents the babysitting gig, high-spirited Ella proves herself to be surprisingly valuable, drawing on her acting skills and 200 episodes of playing a detective. When the press touts Ella’s role in solving a high-profile case, Eddie finds his phone ringing off the hook with new clients looking to hire the pair.”

“The spinoff will be set in 1990-something and follow the hilarious teacher of William Penn Academy led by Tim Meadows (Principal Glascott), Bryan Callen (Coach Mellor), and AJ Michalka (Lainey Lewis), who, despite their eccentricities and crazy personal lives, are heroes to their students.”

“A scripted drama about the inner workings of the New York office of the Federal Bureau of Investigation.”

“As its 30th anniversary approaches, MURPHY BROWN returns to a world of cable news, social media, fake news and a very different political and cultural climate. Daly will play Phyllis, the sister of the beloved, deceased bar owner Phil from the original series, and it’s evident that the apple doesn’t fall far from the tree. She has taken over the bar and is a friend and confidant to Murphy and the gang.”

Welcome To The Neighborhood

“The nicest guy in the Midwest moves his family into a tough neighborhood in L.A. where not everyone appreciates his extreme neighborliness.”

“A 30-something couple, tired of their mundane life, start to reconnect with their younger, cooler selves when a young pop star who is drawn to their super normal suburban life, moves in.”

“Based on author Justin Cronin’s best‐selling trilogy of the same name, “The Passage” is an epic, character‐driven thriller about a secret government medical facility experimenting with a dangerous virus that could either cure all disease or cause the downfall of the human race. The series focuses on a 10‐year‐old girl named Amy Bellafonte, who is chosen to be a test subject for this experiment and Brad Wolgast, the Federal agent who becomes her surrogate father as he tries to protect her.”

“From the producers of “The Good Place” comes a hilariously aspirational new comedy about the best bar in San Diego, home to good prices, great company and, of course, Abby. This unlicensed, makeshift bar nestled in her backyard is the opposite of everything annoying about today’s party scene. There are rules at Abby’s: no cell phones (not even to “look something up”), earning a seat at the bar takes time and losing a challenge means drinking a limey, sugary “not-beer” drink. As the oddball cast of regulars will tell you, hanging out at Abby’s is a coveted honor. But once you’re in, you’re family. “Abby’s” is a multi-cam filmed outside in front of a live audience.”

“In this fast-paced, spy-hunting thriller, Erica Shepherd (Jennifer Carpenter) is a brilliant former CIA operative, now known as the most notorious traitor in American history serving life in a Supermax prison. Against every fiber of his being but with nowhere else to turn, FBI Agent Will Keaton (Morris Chestnut) enlists Shepherd to help track down a fiercely dangerous and elusive criminal she knows all too well. For Keaton, it’s not easy to trust the woman who cost him so much. While Shepherd and Keaton have different motivations for bringing the enemy to justice, they both know that to catch a spy… they must think like one.”

“Emet is the perfect mom, boss, wife, friend and daughter. OK, she’s not perfect. In fact, she’s just figuring it out like the rest of us. Sure, she feels bad when she has a sexy dream about someone other than her husband, or when she pretends not to know her kids when they misbehave in public, or when she uses her staff to help solve personal problems. But that’s OK, right? Nobody can have it all and do it perfectly. From executive producer Amy Poehler comes a modern comedy about being perfectly OK with being imperfect.”

“The Gilded Age in 1880s New York City was a period of immense social upheaval, of huge fortunes made and lost, and of palaces that spanned the length of Fifth Avenue. In the series, Marian Brook is the wide-eyed young scion of a conservative family who will embark on infiltrating the wealthy neighboring family dominated by ruthless railroad tycoon George Russell, his rakish and available son Larry, and his ambitious wife Bertha, whose “new money” is a barrier to acceptance by the Astor and Vanderbilt set. Marian is about to experience a whole new world springing up right outside her front door.”

“Inspired by Bellevue, the oldest public hospital in America, this unique medical drama follows the brilliant and charming Dr. Max Goodwin, the institution’s newest medical director who sets out to tear up the bureaucracy and provide exceptional care. How can he help? Well, the doctors and staff have heard this before. Not taking “no” for an answer, Dr. Goodwin must disrupt the status quo and prove he will stop at nothing to breathe new life into this understaffed, underfunded and underappreciated hospital — the only one in the world capable of treating Ebola patients, prisoners from Rikers and the President of the United States under one roof — and return it to the glory that put it on the map.”

“Welcome to the Village, an apartment building in Brooklyn that appears like any other from the outside but is quite unique inside. The people who reside here have built a bonded family of friends and neighbors. Sarah’s a nurse and single mom raising a creative teen; Gabe’s a young law student who got a much older and unexpected roommate; Ava must secure the future of her young, U.S.-born son when ICE comes knocking; Nick’s a veteran who’s returned from war; and the heart and soul of the building, Ron and Patricia, have captivating tales all their own. These are the hopeful, heartwarming and challenging stories of life that prove family is everything — even if it’s the one you make with the people around you.”

Nothing new officially picked up yet.

[We will continue updating as new shows are announced.]